These images from the exhibition, Conserve-A-Story are the result of over a year of public meetings to organize the theme, content, and execution of the project and its related public events.

The exhibition was on view from April-July 2008 and was accompanied by a number of events to maintain an active space where both visitors and residents of the area could actively participate.

This project took place at Garfield Park Conservatory in Chicago, IL for their centennial celebration. Catalogues from the exhibition are available at the gift shop. Essay from the catalogue

Conserve A Story April – July 2008 Rachel Moore I came to Garfield Park Conservatory while in graduate school with the push of an instructor, Drea Howenstein, from the School of the Art Institute of Chicago. Her class, which she urged me to audit, located itself there to respond and make work based on what was needed. I found myself participating by agreeing to help Julia Bachrach and Jo Ann Nathan collect oral histories for their book, "Inspired by Nature".

The first person I interviewed, Dr. Vincent Allocco, had spent his childhood on Fulton Boulevard. He told me stories of fishing with bread dough in the lagoons - catching perch with his four brothers. He described red plants in the spring outside of the Conservatory and selling newspapers on a nearby corner. Mrs. Nettie Whitney Bailey was the second person that I interviewed. This, I would soon find out, was the beginning of a very important relationship. I spent three hours with her that first afternoon, completely engaged in her stories of collecting leaves for a school project, not feeling welcome in the park at that time, then later realizing her dream of teaching where she lived, both at Beidler Elementary and hosting Sunday School at her own house. I was struck by the difference in history from the first two interviews, both from the same street and roughly the same time.

After several more interviews, I walked down Fulton Boulevard and over to the lagoons. I looked up at the Gold Dome and all of a sudden, this place had meaning. It had a history for me that stuck because it was told, not read, and intensely personal. I imagined Dr. Irving Cutler on his dates playing ping pong there and Beverly Chubat, outside rowing and singing with her friends in the lagoons during summer, and attempting to ice skate there in the winter.

Looping back to the Conservatory I walked under the eL stop and was reminded of stories by activist Mary Nelson and Rev. Eudora Ramey and her son, Paul Ramey, that it wouldn't be there without the activism from the community, and neither might the Conservatory. The activism and beauty of the west side sometimes seems overshadowed by the history of the racial tension, riots, looting, and burning. But an overwhelming force of caring, generosity, protection, and community was happening at the same time.

I wanted people who weren’t natives of either the area or Chicago, like myself, to know the mélange of history through the eyes of residents, past and present. I wanted them to feel the glory and beauty that comes from tragedy and survival, as Diane Kelley explained, and to know how much good comes out of the west side and what it felt like to live through the changes in people and place. So I proposed to the Garfield Park Conservatory that for their Centennial Celebration in April 2008, the area surrounding the building be celebrated with an exhibition in their Community Room. It was important that this project come from the residents, not from me; that it be a true collaboration, in which everyone contributed to all aspects of the project – the theme, the content, the display. With the initial help of Mrs. Bailey, we began.

Throughout the year we held monthly meetings to discuss how this would happen. We wanted to create a place where people would understand where they were. The west side’s history lies invisible to many visitors. The boulevards and Conservatory, rich with plant life, take the stage. What we wanted to do was make known and make visible the history in a deep and penetrating way. We wanted to remind those of their own history and teach others about a place and people who helped keep the Conservatory and surrounding neighborhood alive.

After many months, we began to design the exhibition. We decided to play stories and music through speakers from past and present residents and employees; we made larger than life size photographs that hung on translucent material, overlapping lives, people, and histories; we created a 30’ timeline and map from memory to show what was important to those who lived the history; and we used personal objects to tell stories.

Then we had events, to encourage participation, and active involvement. Several bookmark-making workshops were held where visitors were able to begin their own history with the Conservatory by using ferns from the Fern room. We hosted a play, “In This Place,” written by local playwright, Cynthia Ganter Givens, and performed by local actors, many in high school and college. It was an emotional performance that tugged at the heart, explaining how it felt to live in 1969 in this area.

Without the support, dedication, and immense contributions of all those who participated and collaborated, this project would not be possible. I am especially fortunate to have met and am ever grateful to Nettie Whitney Bailey, Rev. Eudora Ramey, Beverly Chubat, Mary Nelson, Willie May Collins, Diane Kelley, Richard J. Grove, Nicholas Dobkowski, Cynthia Ganter Givens, Leslie D. Rowan, Lindsey France, Tracy Ostmann Haschke, Catherine McClain, David Snyder, Robin Cline and Eunita Rushing for all of their hard work and dedication to this project. 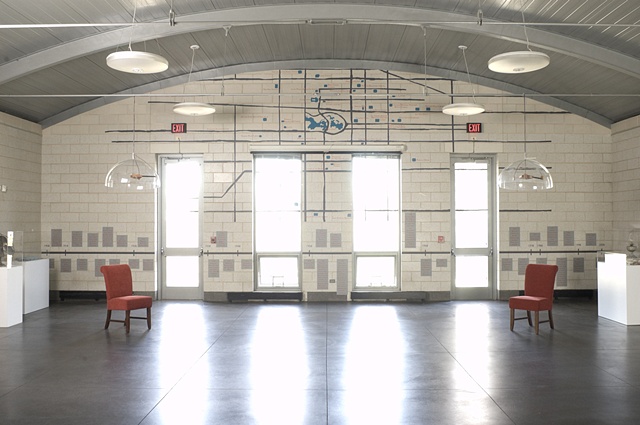